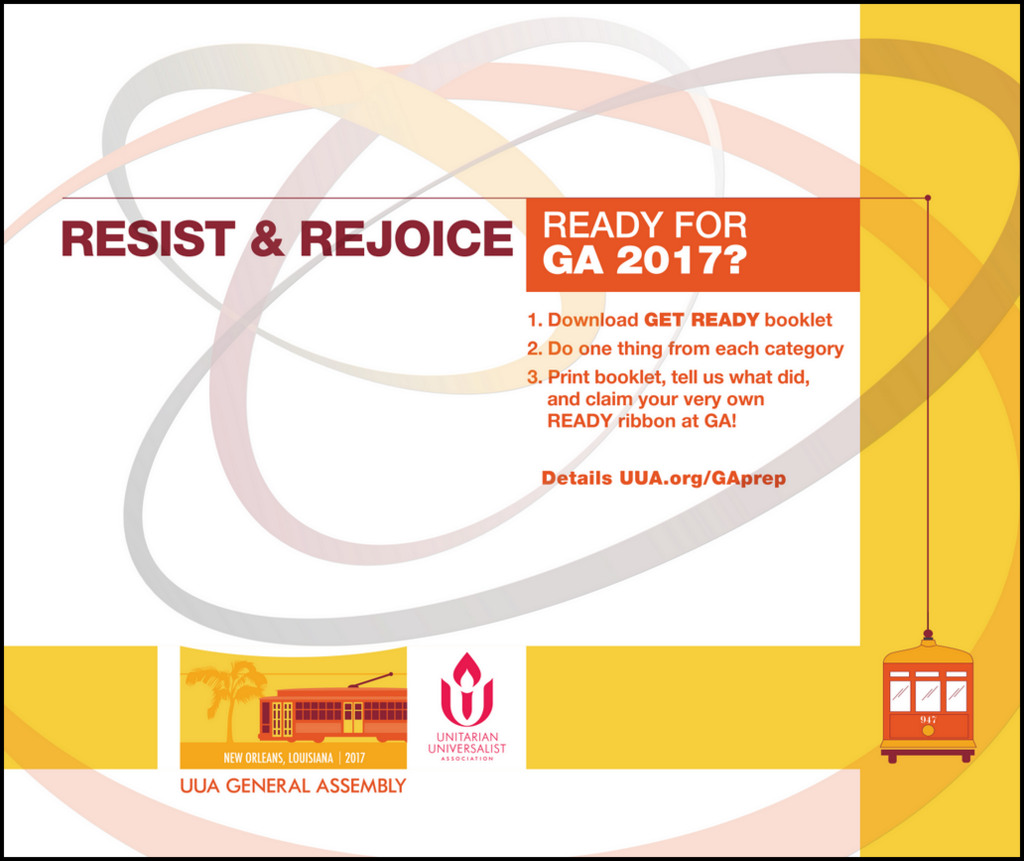 Prepare your heart, mind, and spirit to enter into the Resist and Rejoice experience in New Orleans, arriving at General Assembly ready to learn what the people, culture, history, and geography have to teach! Check out these resources to help you prepare. Before heading to GA, print the READY booklet and tell us what you did. Turn in your list at the UUA Expressway to receive a READY ribbon to affix to your GA name badge!

General Assembly in New Orleans will awaken and deepen the commitment of Unitarian Universalists to the power and possibility of working in solidarity with those on the margins. The activities that have been prepared fall into five categories:

In each category there are recommended books to read, videos to watch and ways to apply what you have learned in a variety of ways. Those who are attending GA can print the pdf, record what they did and present that at the UUA Expressway to receive a ribbon. Those not attending GA can email what they did to [email protected].

Want more preparation or experiences? Then register for the Pre-General Assembly Conference, Undoing Racism on June 20-21, 2017. The Unitarian Universalist Association (UUA), the General Assembly Planning Committee (GAPC), and the Center for Ethical Living and Social Justice Renewal (CELSJR) are partnering together in bringing this unique custom workshop offered by The People’s Institute, a New Orleans-based, national, multiracial, anti-racist network dedicated to ending racism and other forms of institutional oppression.

The Resist and Rejoice! theme of this General Assembly calls us to embody a more antiracist, anti-oppressive and multicultural faith. This two-day pre-GA training is intended to:

Who knows why our Central East Region staff decided to schedule our congregational check-ins for February this year? What a surprising opportunity it turned out to be to see how congregations turn from crisis and overwhelm to resolve and commitment.

I happened to have planned a video call with DC area clergy for the day after the election. What a surprising crowd turned up. It seemed that everyone wanted to be together in an incredibly tender time. They were a shocked and overwhelmed lot. They were afraid for the vulnerable among us. They wondered how they would craft their Sunday message when they themselves were struggling. They wondered how to minister to both the devastated Democrats and the unseen but present Republicans. They were confused and hurting.

Contrast that day to what I found from my calls just three months later:

Folks, people and systems are resilient. We thought we had to make resilience happen, but it turns out that it happens on its own. That’s the nature of human recovery, and thank goodness for that.

What will our congregations do next with this focus and resolve? Will we breathe a sigh of relief and fade back to our old, perhaps less directed, perhaps less effective ways? Or will we learn the lessons these times have to teach?

I think we’ve just re-learned what focused church can do. It comforts and strengthens those who suffer and those who work hard at recovering. It is a place where love and compassion are planted and sprouted so that those who participate are at their best in the rest of the world. Church can serve as a countercultural beacon, declaring through words and action that no matter what happens out there, love wins in here.

Don’t forget that what you do matters, you are not alone, and your Central East Region team is here to help. May we keep the resolve and focus that have been hard won over the past few months. May we see our value more than we ever have, and use our power more than we ever did. May our churches be the shining light that both welcomes us home and lights our way forward.

That’s the title of a recent book written by Joani and Thom Schultz.   The title shouldn’t shock many of us anymore. There is a lot of evidence for its assertion. According to the Hartford Institute of Religion Research, more than 40 percent of Americans “say” they go to church weekly. As it turns out, less than 20 percent are actually in church. In other words, more than 80 percent of Americans are finding other things to do and places to be on weekends.  We also know that somewhere between 4,000 and 7,000 churches close their doors every year. Some researchers put that estimate higher, between 8,000 and 10,000 churches closing.

The “Why” in the title is a question with a variety of answers.  We know there are a number of factors involved: changes in the way people regard Sunday services,  demographic changes,  different ways we now view volunteering, competition on weekends, fewer young families with children, and more.  Some people feel spiritual but no longer find institutional church meaningful.  Some don’t want to be in a place where they feel judged for who they are or what they believe.  Some are not certain and won’t commit till they have had more time to consider.   Others are simply not interested.

So inviting people to come to a church on Sunday morning when that’s one of the last places they want to be might not always be an effective means of outreach.  There are other ways, however, we can use to invite people into meaningful spiritual community that are not focused on Sunday morning.

A number of faith communities from different traditions are experimenting with spiritual Conversation Cafes.  One of the best known of these Cafes is “Lifetree Café.”  These 60-90 minute weekly Cafes focus on guided dialogue on a wide variety of topics in an intentionally welcoming, open, “non-churchy” atmosphere.  They are often held in coffee shops or tavern party rooms or libraries or other non-church spaces to eliminate the ‘stigma’ of being inside a church building.   Participants are invited from the sponsoring church and through Facebook and Meet Up and personal friend-to-friend invitation.

These Cafes are a little like small group ministry, but there is no expectation that the same people will show up each week.  Instead, each Café begins with a short introductory exercise that assume people do not always know each other – yet.  Then the following program is designed to lead to deeper levels of discussion and relationship building, moving eventually into some form of spiritual question.

North UU Congregation in Lewis Center OH has been experimenting these past two months with the Café format and is using Lifetree Café curriculum (sometimes with small edits to maintain a general UU orientation.)  People who have experienced these North UU Cafes have found the chance to meet and engage in dialogue with non-church people meaningful and feedback has been supportive.  But participation has varied widely depending the topic.  The established curricular topics are very general and, in light of the major social issues facing us today, some topics have seemed relatively inconsequential.

Consequently, the North UU Café volunteer team has decided to create its own conversation café curriculum beginning March 2017.   They have been discussing the use of topics that are more immediately relevant to current social and political developments, with the expectation that these may be more inviting to both congregational members and non-members.  But the Conversation Cafe dialogue format is something they want to keep and cultivate and expand.

This experiment in outreach is still  in development and it will be evaluated continuously as the team moves to create new curricular topics.   The experiment has already highlighted the fact that Sunday morning in a church building is not the only time and place where meaningful spiritual community can be created.